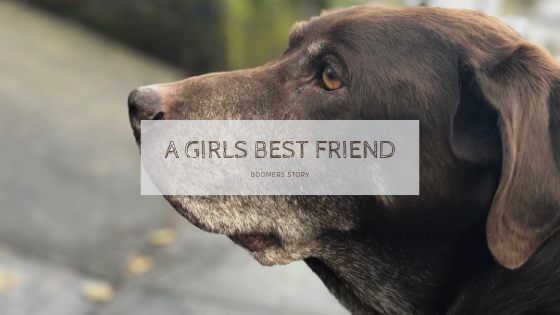 It’s time for me to face the truth.

Boomer is old. He’s blessed my life for 13 years now, almost 14. I try not to think of what it’ll be like without him because it usually results in me breaking down and crying. But I think it’s time for me to start thinking about it. He won’t be with me much longer, so I’d like to look back at my memories with him and think about the good times…and bad times…we’ve shared together. I thought it would be nice to write a post about his life, so I have something to go back and read and hold onto. 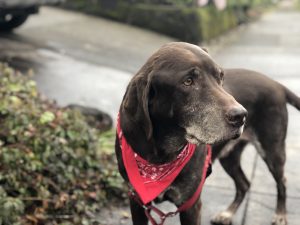 Boomer recently. He’s lost so much weight that he doesn’t fit his harness anymore.

Boomer is a special dog. He’s a massive chocolate lab with the kindest heart. He’s a man of many names. Boomer, Boomer Dog, Boom Boom, Boomie, Bubbi, Boomer Doggle. The list goes on and on. He’s a pro at escaping and running around town. I’m pretty sure the Gladstone police know him by name. I remember one of the times he was brought home, one of the policemen gave him a ride back in the back of his car. Boomer was ecstatic! The number of times he ended up in the back of a cop car after that is too many for a dog, that’s for sure. But I know he loved it. He probably thought it was hilarious running from us as we chased him down our street.

One thing I’ll always stand by is that Boomer is MY dog. My sister has her dog, Moe. My parents both have Tug and Izze, and my brother and his wife have Westy. But Boomer is mine. Since I was a 5th grader in 2009 to now, he has slept by my side every night. I remember the first time he ever slept with me. He has slept with me every day since.

In 2009 my family and I rented an RV and went on a two-week camping trip. Inside this RV there were a set of bunk beds, I slept on the bottom one. Boomer was about 4 years old at this time. Halfway through the trip, I remember waking up early, at around 6 AM, because I couldn’t feel my feet. They were completely numb. My sister’s blankets were hanging over her bed so anybody walking by wouldn’t have been able to see me. When I woke up to numb feet I looked at the foot of my bed. Because I have such terrible eyesight, all I saw was this big brown blob on my legs. Even though at this point in my life, Boomer and I did not get along, I decided to savor the moment because he wasn’t allowed up onto beds. So, I left my feet underneath him. Soon after, I remember my dad waking up and freaking out because he thought Boomer had somehow gotten out. I’ll always remember that time because he was my sleeping buddy every day after that. 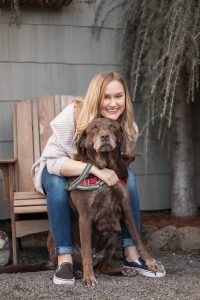 People are always so shocked to find out that Boomer and I didn’t get along when we were younger. To be honest, I absolutely hated him. Up until 2010, he was not a well-behaved dog. Just sitting down outside and he would grab my hair and drag me around the yard. He was mean and wild and I was very scared of him. How he became such a calm dog is actually a pretty sad story. Until 2010, Boomer lived outside. I know, terrible. But we had this big fenced in area with a dog house that he lived in, with our other puppy Charlie. He was a chocolate Weimaraner. He was ten times more wild than Boomer. But, Boomer loved him. They were best buds. When My family and I, minus my Dad, went to Sea World (I know..) Charlie’s stomach had flipped after eating a rock. When it flipped back, he unfortunately died and Boomer saw it all. My Dad tried to save him, but there was nothing that could have been done. I remember being in our hotel and having this gut feeling that something was wrong. So I called my Dad and asked how Charlie was, and I could tell he was trying to sound positive when he said he was “fine.” But I instantly knew that he wasn’t fine.

After that incident Boomer changed. He became very depressed and calm. He no longer attacked me, instead gave me kisses. We let him live inside and got rid of the fenced area. From that moment on, Boomer was the calm cool and collected dog that we all know and love today. And from that moment on, we became two peas in a pod.

We got Boomer in Sunriver in 2006. There was a family with two labs that were selling their puppies in the back of a truck. All of them were black labs, except for Boomer and one other. I remember when my dad said we were going to go pick him up. We had just played a game of softball with our family friends and had gotten back into the car. Instead of going back to the cabin, we drove to where the car was parked and picked him up. I was instantly obsessed. Sometimes I swear he still has that puppy smell. We brought him back to our cabin and made a little bed under the stairs for him. I was given the job of taking him out back to pee. I loved that job because it got to be just him and I. 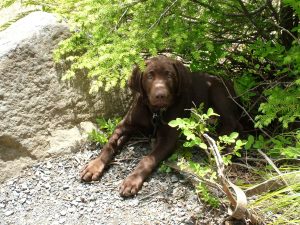 Boomer about 6 months after we got him, his paws were so big. 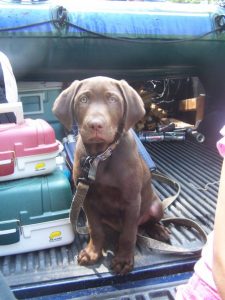 The leash he’s wearing is the one he still uses today. It has little holes on it from where he nibbled as a baby.

Boomer and I will always have a special bond. I don’t think I will ever connect to another dog as I do with him. He truly is my best friend. He lays in bed with me and watches me as a spill my heart out to him. He follows me around the house and nudges me when I need to make room on the couch (sorry Mom and Dad). Although he’s an old man and is struggling with some things now, I know inside he’s still just as wild as he used to be. I’m sure if he was physically able, he’d run out the back gate when it’s left open and go running around the neighborhood instead of just staring at it. I’ll miss him a lot and I want to hold onto him for as long as I can. I know that might be selfish, but I feel like he still has so much life to live. He still has that pep in him that tells me it isn’t his time quite yet, but I know it’s soon.

I know they say that a dog is a mans best friend, but nothing can come between a girl and her dog. It’s something special. 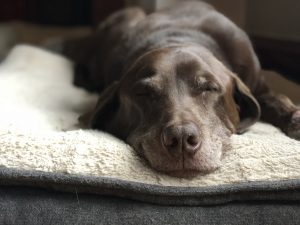 Boom modeled for me while I was playing around with my iPhone camera. 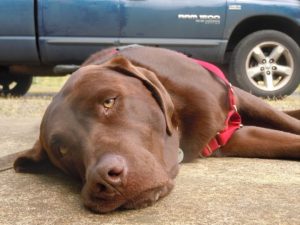 I remember laying down with him after this photo was taken. We went to Netarts in 2011 and he was tired from running around the beach. He still uses that harness.